Posted at 19:56h in Spain, Travel bits and pieces, Uncategorized by woodman1 0 Comments

So, Almeria. Maybe it’s a city. Not sure. One of those in-between places. Massive port though with all sorts of ships moored alongside regular ferries to Morocco – a crossing that takes anything from 5 to 9 hours – I think that’s more about destination rather than simply that some of the boats are slow!

In any case, in my enthusiasm for all things Spanish and determined as I am to speak it better, I signed up for 1 to 1 conversation classes at the Almeria Spanish School – rather disappointingly also named the London-Thames School of English. I guess the ‘Thames’ is to make sure there is no confusion with another London – or because the dotcom had already been snapped up elsewhere. I think its main business is teaching English to young people seeking a way out of Spain’s desperate youth unemployment trap. Underwhelming names aside, London-Thames  replied to my enquiry and came up with an offer. So I am booked for a 2-hour session each week with the delightful Amaia who has already taught me tons of new stuff and boosted my confidence to venture an opinion in Spanish! Bravo !

The school is spitting distance from the very centre of the old town and just under the Alcazaba – the Moorish citadel built in 955 AD up on top of the hill. Apparently this has a section added in the 1480s by Ferdinand and Isabella, so right there 500 years of Spanish history at a glance. The Alcazaba is on the list for a full visit on another day.

Jim was left to explore Almeria while I chattered my way through my class and he pronounced it a great place. Actually, he pottered around the old part of town and looked out art shops, lest he run out of supplies. Fat chance.

But he had time to sketch – so here they are giving a flavour of the place. The cathedral – its tower is to the side and just out of ‘sketch’. And a nameless fat lady (not singing) in the Plaza San Sebastian. A few blocks away, is the old covered central market, now modernized and with displays of fruit and veg that qualify as art forms and a fish market covering a whole floor. Weekly shopping takes on a whole new meaning while the absence of an oven haunts and daunts still more. Ah well – many a stew can be fashioned and we can always make a salad! 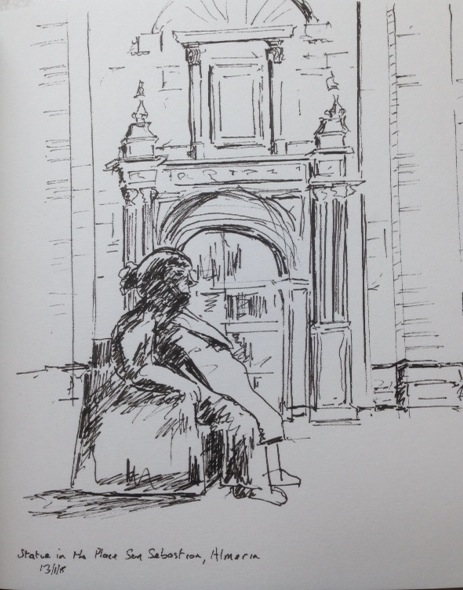