Sitting outside Casa Enriqueta for a tiny tapas lunch of cheese and bread with some tomatoes on the side unadorned save for the sprinkling of salt and a drizzling of the most delicious olive oil, bright green and full of fruit. Enriqueta served us herself – an enigmatic woman running a strangely ambiguous hostelry, to say the least. We arrived fresh from an uphill grunt (of which more, by and by) and she was watering the innumerable pot plants outside her door. The red crates labelled Cruzcampo, a popular Spanish beer, were stacked close by giving a hint that we were in the vicinity of a bar but you’d never have guessed it was located in Casa Enriqueta. This just looked like a regular house on the main street in the pueblo, at the corner of the square where stands the very lovely church. We approached; I greeted her, commenting on the warmth of the day and the steepness of the climb and asked her if there was a bar in the pueblo. To which, quite unexpectedly, she replied “Si, aqui” – Yes, here! Sure enough, the modest entrance complete with chain-style fly screen at the door, led into a cavernous rectangular room with several tables and chairs and a small bar on the right. Deserted. The sun was warm and the view from the front was great so we parked ourselves on the generous wooden bench outside and ordered up a couple of beers.

Enriqueta is as inscrutable as her establishment. A square, squat woman somewhere at the far end of her 60s, she is dressed in the overall/apron typical of women of a certain age in little old pueblos like this. Huebro is its name and it is a little old pueblo. She keeps an eye-catching captive garden out front with countless pots crammed up against one another, all shapes and sizes and a huge variety of botanizing is going on here along the edge of the road opposite her door, which is also the edge of the village and there’s quite a steep drop the other side down to a few fields with fruit trees and olives scattered about. She seemed forbidding at first, a little reluctant to engage in a conversation, but warmed to me, or so I thought, when I spoke to her in Spanish. This drew a smile, but one of those short-lived ones that turns back to a frown as soon as her head turns away. You know, you need to ensure a full 90 degrees of head turn before disengaging smile and reverting to frown and Enriqueta needs to work on this – she’s just cutting it fine at 80 degrees and that means the punters get a sense the smile is fickle and the frown for real. I think she’s just shy, or maybe business is really rotten right now; after all, we were the only punters throughout the hour we spent loitering on her front bench.

We reached Huebro and the baffling Enriqueta via the Ruta de los Molinos (mills), a spectacular narrow trail that hugs and occasionally traverses a deep gorge or barranca covered with now derelict water mills. The river is dry now – as most of the rivers are in this part of Spain. Water still flows through acequias, irrigation channels that you find all over Andalucia. These clever and, in some cases, quite beautiful bits of rural construction were innovations brought by the Moors and ensured that crops could be grown across the most unlikely hillsides even in times of low rainfall. Here the acequias must have been used to divert water into millraces and then, with force, down onto the wheels. They were milling flour up here from the wheat that used to grow on the vast expanse of plain below, many years ago before things started to dry up. Now the only water that runs through is from the reservoir up at Huebro, which is refreshed only occasionally by rain and the plain’s still vast expanse is now plastic coated, a colossal campus of poly-tunnels. 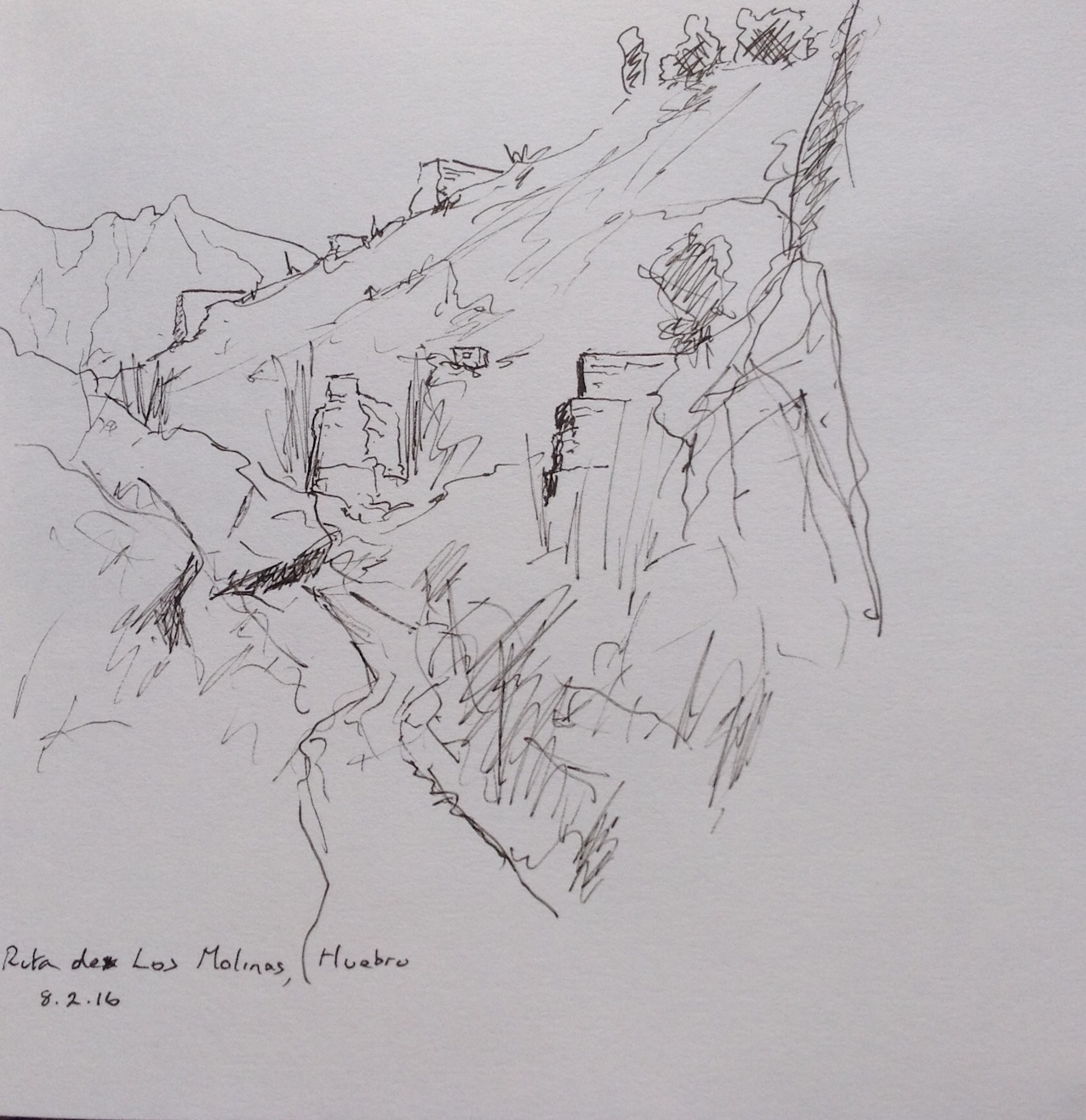 According to the guide for the walk and allowing for any faulty translation, there were 28 mills up this gorge and you can still see the remains of 22 of them. Incredible. Even in their state of dilapidation and disuse they’re quite a sight, perched like a ladder of stone towers on the steep slopes of the barranca that narrows as you ascend. A bit of early 19th century engineering that takes the breath away. Must have been quite a sight (and sound) when the river proper surged through and 28 mills were doing their stuff.

The walk was a joy, setting out from the bigger, equally picturesque pueblo of Nijar at the foot of the valley, and renowned for its artisan workshops producing colourful ceramics. After about a kilometre we passed one of the oddest warning signs I’ve ever seen on a trail – and slightly disconcerting too; a notice states that security or rescue in the event of attack by wild boar is not available during the hours of daylight! There is so much that’s somehow off the wall about this statement; and it didn’t seem to be a case of meaning lost in translation as it was set out in 6 languages, 4 of which I could just about understand!

The trail climbs up steadily at first and then steeply, so a bit of a lung-ripper on the way up and a knee-trembler on the way down. The views from high up are expansive taking in a massive area of the sierras, with their different peaks and shadows. In the middle distance there’s the plastic poly-tunnel world laid out in front of us looking, for a moment, like so many lakes or ponds, but a fleeting moment because you soon adjust your focus see it for the eye sore it is. A minor deviation off-piste as it were, when Himself, great mountain goat that he is despite his years, set off impetuously, far too impatient to wait for the Spanish interpreter to work out what the instructions would have us do. But nothing serious – just a few hundred metres of doing battle with rocks, prickles, thorns, thickets of bamboo and the ticklish possibility of coming face to face with a frisky wild boar. But, we bravely made it through and were (eventually) back on track. As well as the memorable Enriqueta and her eponymous Casa, Huebro has one of the standout loveliest churches I have seen – and that’s saying something because the churches are all charming and well kept, if not well used. This one is a stunner with the most elaborate street lamp outside in the middle of the square. The Artist did a sketch and then we set out back down the way we had come, omitting the scenic detour through the bamboo and prickles, just for the hell of it! 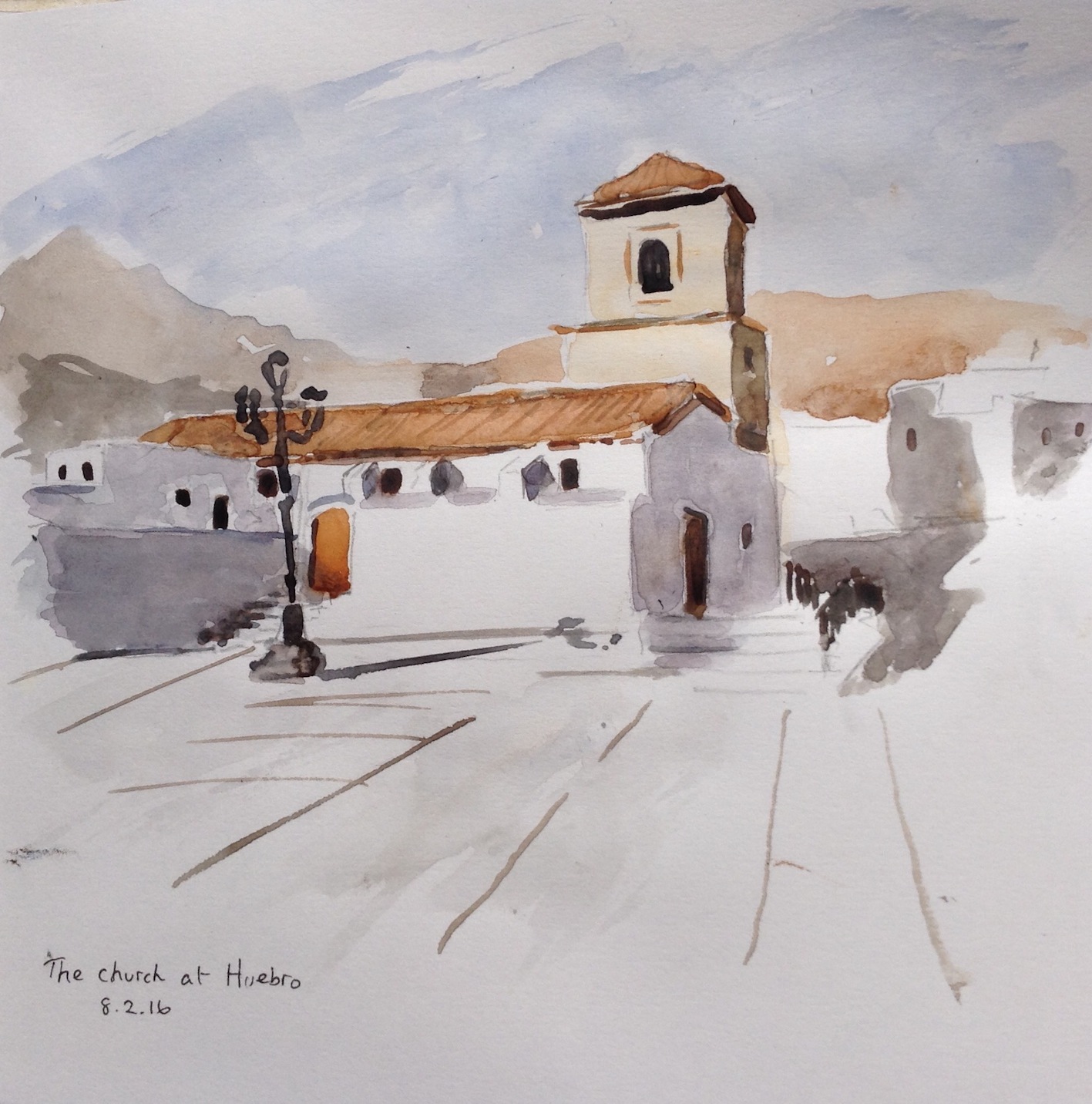