Posted at 15:14h in Uncategorized by Lizzie Aitchison 1 Comment 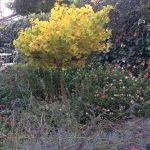 My lovely ginkgo is reaching its annual loveliest. The leaves turn brilliant yellow this time of year, pausing for the briefest time before falling to the ground, as if the branches are worn out by the long season of weight-bearing. Despite its slender trunk and compact frame, it’s stacked with leaves from spring each year, their rounded, voluptuous shapes like scallop shells or fans sprouting at every angle.

Ginkgos must be slow growing. I read somewhere that they can reach 80 feet and the ginkgos I’ve seen at Kew Gardens are big in all dimensions. This just wouldn’t work in my little garden. I suppose, among ginkgos, mine is purposefully stunted to be prettily ornamental. A generous umbrella of foliage atop a long, bare trunk. Let’s hope so.

It was a 50thbirthday present and arrived in a pot with a bow and a card and a profusion of bright green leaves held up on a twig-like trunk. Like an upturned mop or a waif with crimped hair. I instantly had a sense it was vulnerable, fragile, exotic. I planted it in what seemed at the time to be the perfect spot, sunny but sheltered. It settled and grew, its trunk thickening until it no longer needed a cane to keep it upright and support the unruly yearly growth on its head. 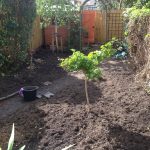 A few years back, it was the one thing that survived the total garden redesign; everything else was dug up.

I’m not quite sure why it’s so precious. It gives a focal point in the garden, for sure. But I’m not a ‘focal point’ sort of person when it comes to gardens. Jim drew a plan (no straight lines, gravel path meandering among plants) and, apart from that, nothing has been designed. Most of the planting is from cuttings from other people’s gardens – Skye, Deeside, France, Kingston and Thames Ditton. I have an unstructured, random approach, which seems to work most of the time and is easily fixed when it doesn’t. Just dig it up and put something else in.

It’s not because of who gave it, though that would be a reason – a sort of memorial tree to her life sadly ended by ailments of body and mind. We weren’t close. It was one of those friendships that blossomed quickly and faded even faster. A season or two and then, like the fall of the leaves in autumn, a swift withering. I was intrigued by her eccentricity, her colourfulness. But it was impossible to forge a friendship. She was too demanding, too volatile, gloried in being outrageous, a fugitive spirit.  Sometimes I wondered about trust, so entirely different was her take on the world. I realise now that, probably, she was terribly lonely.

Her eccentricity was a fit with the exotic strangeness of the little tree. There was something attractive about her quirkiness and unconventionality – how she often wore pink and how strikingly it clashed with her red/orange hair. The ginkgo she gave me all those years ago is just like her and not at all like me. Funny how we are drawn sometimes to people so unlike us, people whose lives, because they are so different, seem full of drama and easy self-expression. Moths to a bright light. They represent what we are not. Now I think about it, maybe it is because of her that my precious ginkgo survives.