In search of Spaniards – a Sunday stroll in Bedar

18 Jan In search of Spaniards – a Sunday stroll in Bedar

Posted at 18:08h in Spain, Travel bits and pieces, Uncategorized by woodman1 2 Comments

Sunday morning and we have walked into the village in search of some Spaniards. Beyond the señoras of the supermercado, the panaderia and the peripatetic Postie, sightings have been rare. Not that we’ve been in the least exhaustive in our efforts to locate them. We’ve been reasonably contented on our splendid hillside, where we are, in a generously spacious way, surrounded by Ingleses or by large cortijos shut up until their foreign owners return. Forays into the village during the week in my fruitless quest to commit parcel to post and to make small purchases have revealed two Agencias Immobiliaria (estate agents), yes, two in this small village of 960 souls. Added to that (and inevitably, I suppose) Se Vende signs are frequent, and big discounts are offered on sales. All of which makes me think the village demography must be changing.

So, on this splendid day, we walked across our hillside, past its crumbling, ancient but abandoned terraces and its scrubby, shrubby slopes, diverting along a little track lined with aloes and carob to reach the back route into Bedar. We found this on our first exploratory walk, desperate to avoid a return down the main road, a long tarmac trudge following every hairpin bend in a frustratingly double-distance trek that had been our route into the pueblo. The back route takes a steeper, shorter road entering the village below the Plaza de la Constitucion. A tiny little plaza as plazas go, but here has stood, these last 180 years, the Casa Consistorial, administrative heart of the community and a classic example of a Spanish public building complete with national, regional and EU flags fluttering outside. We’ve walked higher up into the village now and are perched on a little wall. I can look down to the Casa Consistorial, its whitewashed walls fringed with a wide band of yellow paint echoed on the window recesses, its evenly pitched roof tiled in typical terracotta. Timeless and solidly Spanish.

On the left the view takes in the Iglesia Santa Maria occupying its own small square, the old church with its dominant, central position and its squat square tower, a weather vane on top at a jaunty angle for some reason. The Artist is at work as I write – so a sketch will fill out the detail of this scene. There’s an odd thing about the churches in these little whitewashed villages – they are the only buildings that aren’t white! They’re rendered in a warm, peachy-putty colour, and that’s true across the whole of Andalucia. In October, we visited many such pueblos and saw many such churches further west in the foothills of the Sierra Nevada on holiday with Antonio and Valeria (aka Dotty Rawlings) from Toronto, and we commented on it then. It’s as if the head honcho of a large ferreteria, keen to expiate his sins and cleanse his soul before departing this mortal coil (or, perhaps, to offload surplus stock), donated his entire supply of putty-peachy paint to the Andalucian diocese. So, as elsewhere, the church in Bedar is set apart from all the little whitewashed homes crowded around it along the narrow lanes and alleys. Terracotta roofs everywhere give that lovely tonal glow as different angles coalesce, reflecting light and shade and the various stages of weathering and combining into a wonderfully random pattern of tawny brick and russet.

The church bell rings out every quarter of an hour. That seems to be it in terms of ecclesiastical action at just after 11 am on the Sabbath. A bit of a surprise given my assumptions about Spain’s Catholic traditions probably being alive and well in its rural communities at least. Could it be that, like the Postie, the Padre is peripatetic and Mass is a once-a month event plus High Days and Holidays? Certainly, when we arrived early in the month, all the usual mise en scène of the nativity was still on display. Presumably there were Masses (if not masses) in Santa Maria for Navidad – and maybe there will be again come Easter. Between these big festivals, who knows? Or maybe, one wonders, these communities are just not very religious any more. The supermercado, run by a genuine Spanish señora somewhere in her middle years, is open today, a sure sign that things have changed.

A cock crows on the edge of the village, sounding very grumpy; a few dogs bark at one another; the breeze rustles the leaves of the orange tree beside me. People are out and about – a little, given it’s Sunday morning. But, I have found them, the Spanish, I mean. Here, in the lofty streets of this old pueblo is the heart of the community, where the Bedar ‘localidad’ appears to survive – and thrive. A few children run in and out of open doorways, calling to one another. There’s a school, a colegio, a piscina municipal. Hurrah! The village is still home to a population of genuine Spaniards. 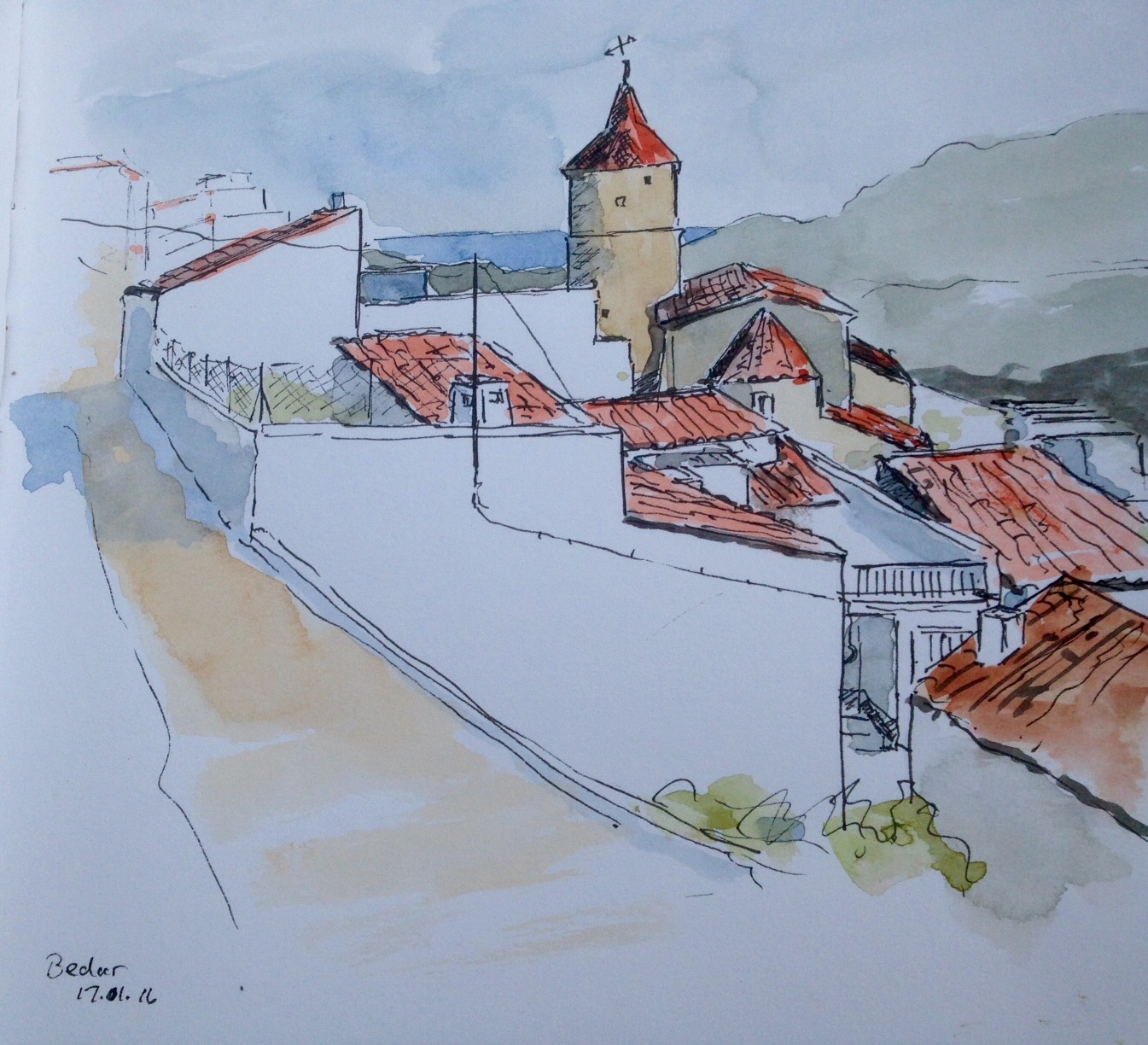