Lubrin – a saint and a fiesta

Posted at 15:59h in Landscape, Spain, Uncategorized by woodman1 0 Comments

Yesterday, what a day! The Berlingo eased through the low gears in the morning, handling the hairpins like a wannabe rally car – what a motor! We were headed into the back country on a spectacular road, high up in the Sierra de los Filabres, destination Lubrin. The journey was a treat, up and away from the creeping coastal strip where the sale of property and parcels of land has edged agriculture out of the economic mainstream. Not 3 miles up the road out of Bedar, things are different. The terraces here are well-kept; olives stand in pleasing rows; almonds alongside starting to bloom with their gentle pink blossom. You pass by little communities nestled in valleys or on sheltered slopes, El Marchal, El Campico, looking much as they did perhaps a hundred years ago. It’s beautiful, tranquil, romantic, all those attributes of unspoiled-ness that you look for if you’re the type that eschews the beach and the bright lights and wishes for something of the ‘real Spain’. Unspoiled but unimaginably tough, no doubt, if you have to live here and try to earn your keep. Once upon a time it was the real Spain and some of it clings on to bewitch the visitor and transport you back to a different time. But romantic? Maybe not.

Lubrin is bigger than Bedar, a sizeable mountain community straddling the hillside and with the typical maze of streets and whitewashed buildings. The huge brick-built church is the town’s main landmark, much bigger and in a style very different from your average pueblo church, not so much putty-peachy, more bricky-bricky. Every 20th January the Fiesta of Pan (‘pan’ as in bread, not Peter) takes place here. In fact, definitely not Peter, but rather Sebastian. Poor old St Sebastian, he of the multiple torments and perpetual sorrows, executed twice poor bloke, forever sculpted with the arrows in his torso that killed him first time round. He’s the guy at the centre of things in the Fiesta de Pan. Lubrin and St Sebastian clearly have a special relationship. There’ s a statue of him, a rather unusual one, outside the Ayuntamiento, the local council office in the centre of the village. There he is in white marble with all the usual details, agonised face and abdominal arrow, but in Lubrin he also has large ring-shaped loaves of bread draped over his arm. I haven’t been able to find any link between St Seb and bread, but if there wasn’t one before, then there certainly is now.

We had no idea what to expect at the Fiesta de Pan. Being a bit of a bread junkie and novice sourdough bread-maker, long on enthusiasm but, as yet, short on skill, I had assumed and hoped that there would be bread-makers gathered here with stalls of different breads to smell, to taste, to drool over, and perhaps even a Best Bread in the Festival Prize. In any case, I did expect there to be a big focus on bread. And there was – only not quite as I imagined. For the full story read on…..but first, here’s the sketch. 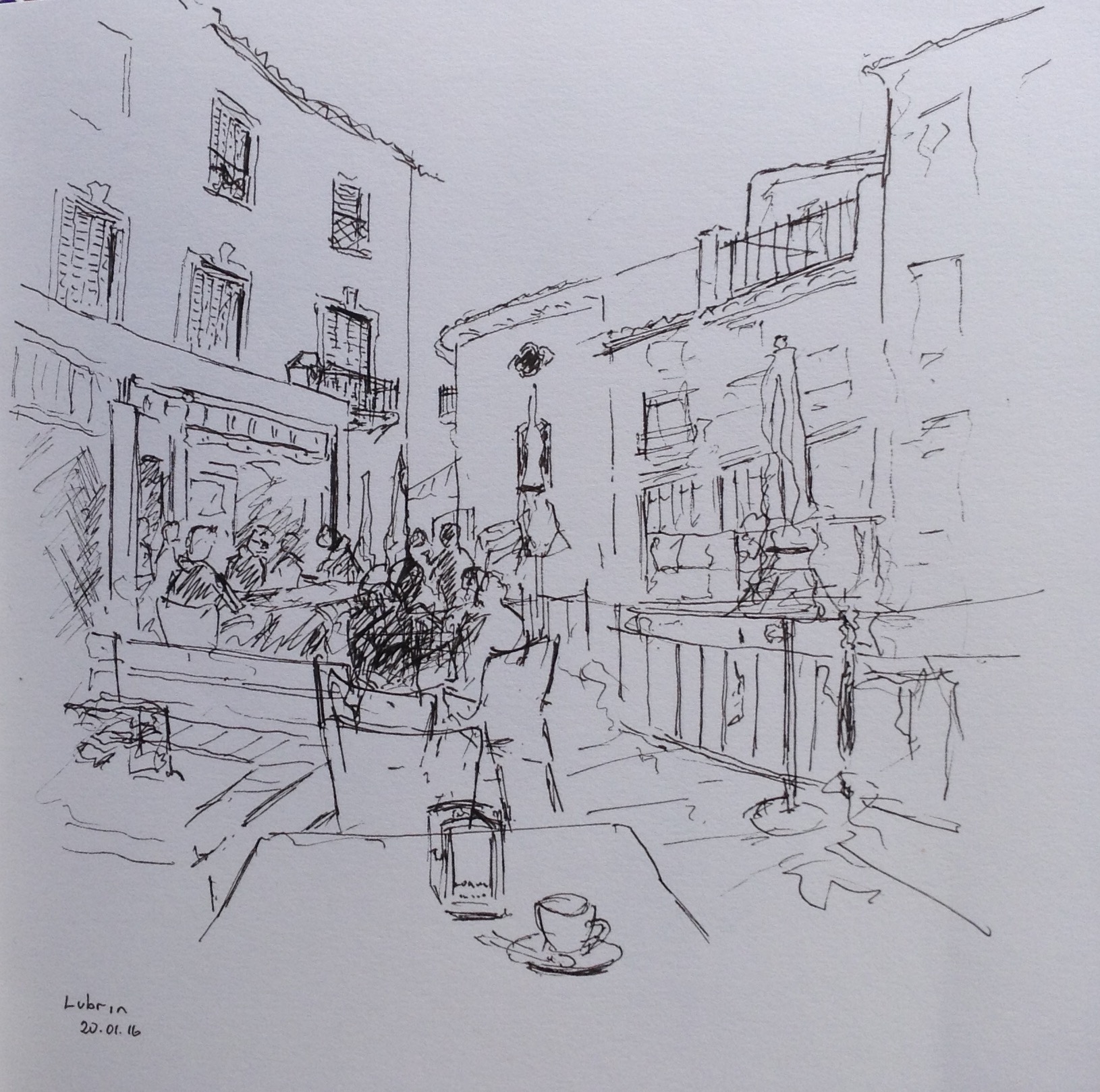