Posted at 17:00h in Landscape, Spain, Uncategorized by woodman1 0 Comments

Rambling has another connotation here in Spain – in addition to walking and wittering on (and yes, I agree, I have a capacity and a penchant for both). A Spanish rambla is a ravine or watercourse – although as is obvious from other blog posts, the ‘water’ is a misnomer these days. So, rambling in a rambla is a double dose of delight – and wittering on about it, well…

Wednesday and another instalment of the bootcamp found us exploring a new sierra. The majestic Sierra de Carbrera rises near the shoreline running south from the beach resort of Mojacar. The Sierra de Cabrera fills our view from the cortijo and we can watch the light change on its slopes throughout the day, turning it from darkest grey to velvety brown in the golden evening light. So getting up close and personal was way overdue.

The Rambla del Moro wends its way deep and high into the Sierra de Carbrera. And what a rambla. El Moro – the Moor. Here again are the remnants of Moorish settlements and their extraordinary agricultural and hydroengineering inventiveness. Cortijos stand solitary on hillsides or in little groups – cortijadas. Stone-built and crumbling but enough remains to still see their style and hints of how they lived: the small square towers, circular ovens, the odd mill building, the acequias and the terraces still clinging to the hillsides, hosting almonds or cactus or some other species that can tolerate the drought. And alongside the ruins are dwellings where a few brave souls live their lives, keeping some olives, some almonds, and some bees.

The usual display of wild flowers enchants and amazes. Gentle, muted hues interspersed with bold, colourful statements. Exquisite deep scarlet poppies on squat stems nestle among the rocks at the side of the rambla, the first time we’ve seen these. Another new one showing up in group formation, somewhere between large daisy and small marguerite, makes vignette appearances, a great gang of them cascading down a bank then disappearing again around the next corner, to reappear hundreds of metres further on.

Our destination is the Fuente del Moro, an old well high up on a promontory overlooking the intersection of barrancas that once upon a time brought water coursing into this rambla. The Fuente is directly below Arraez, the highest point of this Sierra – at 970 metres. We’ll save that for another day. It’s quite a sight and the walk has been a steady climb on an easy path (well, easy underfoot, that is) tracing in reverse the way the water used to flow. Turning back from the Fuente to shelter from the wind (and the beehives), we stop for lunch and I set to writing. Himself is doing some sketching in between bites from the cheese and tomato sandwiches that we’ve brought for lunch. This is the second sketch of the day. The first was of the Cortijada del Moro, a little abandoned Moorish community in a small sheltered valley below the trail. It’s a fantastic sight; you come upon it quite suddenly as you crest a hill, laid out at your feet, this tiny pueblo lived in 500 years ago or more. The rambla gave them water and its generous slopes provided fertile ground and shelter. And as for the building materials, well that’s a whole other feature of this walk for which a pocket geologist would have been handy. 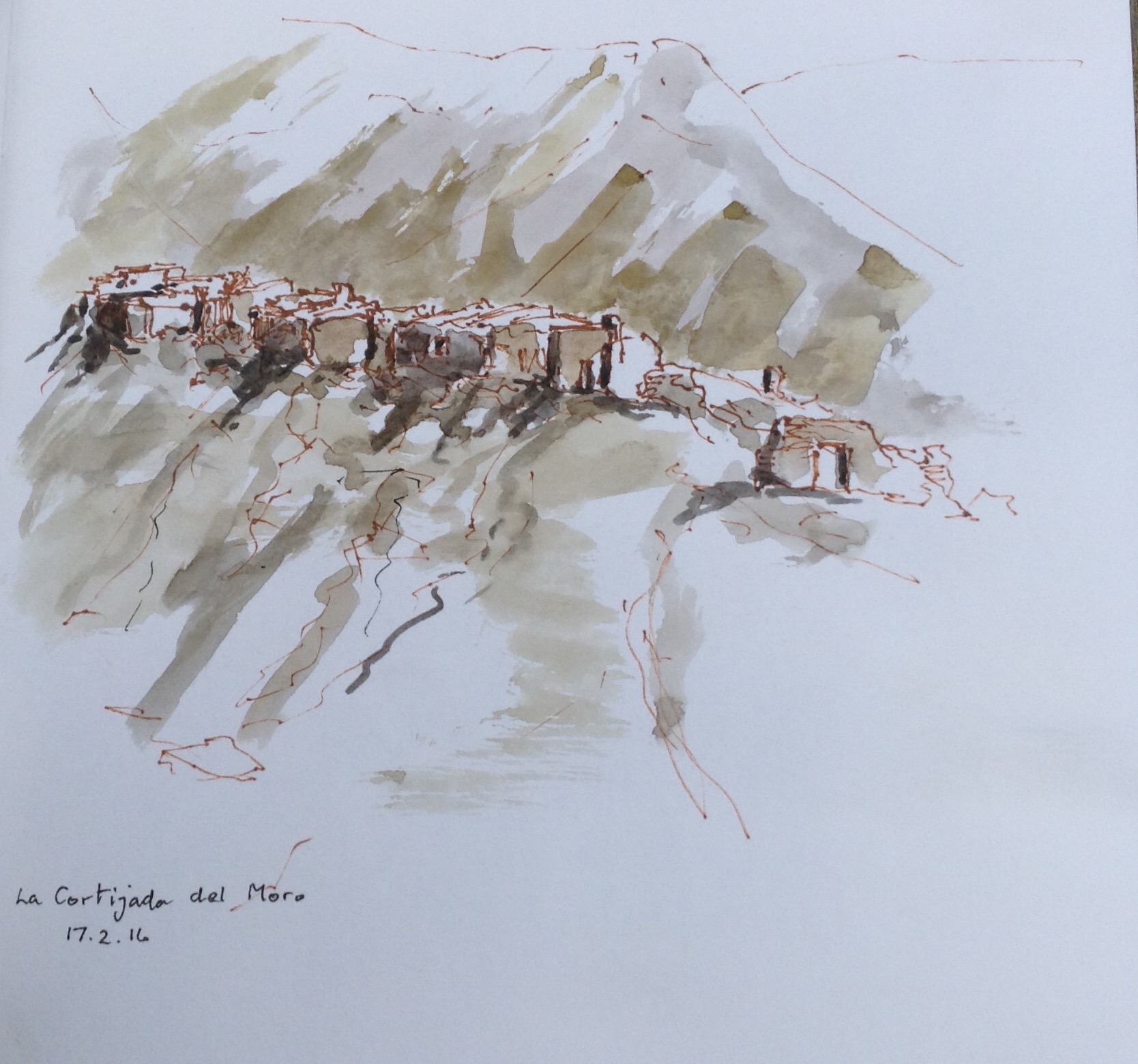 The lower, wider parts of the rambla, where the river cut through with real power have some spectacular outcrops of what looked to me like slate. You know the way it seems cerrated in cross-section, as if each slim layer had been sculpted and laid carefully on top of the last, in astonishingly even slices; nature at its most uncannily methodical. As we walked up and through this landscape the light would sometimes catch the surfaces of rock on the hillside, great flat, smooth slabs glinting, looking almost wet, as if the sun had just come out after a huge downpour. Close up, these rocks are so perfectly smooth and their colour is so even you’d think they’d been spray-painted a shade of silvery mid-grey. Imagine fashionably cool tiles in a bachelor’s bathroom and you’ll have it.

Failing pocket geologist, I have done a bit of research piecing together notes from the trusty Spanish trail guide, crafty translation of the big words and a quick recce on Google, so that I can confidently tell you that we walked through a vale of mica schist. Get me!

And probably the last walk of this Spanish sojourn, so it’s a little melancholy too. 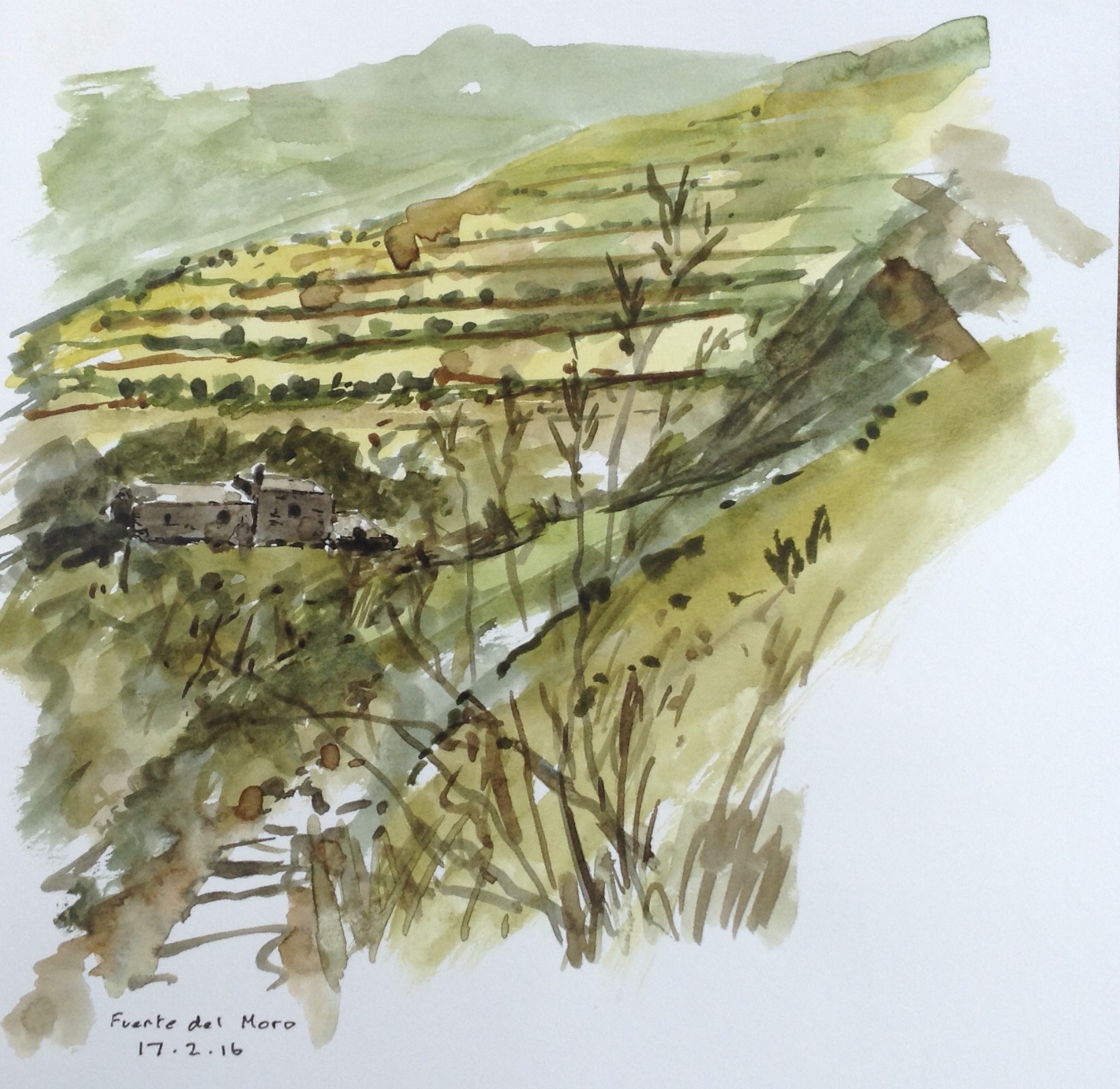