Posted at 12:54h in Landscape, Spain, Uncategorized by woodman1 0 Comments

I wanted to write about the flora and fauna hereabouts and came up with a witty title for the post – Aloe Aloe! Well, it would appeal to anyone who watched the classic 1980s BBC sitcom with the incomparable Rene, who would, no doubt, have had some risqué things to say about these plants. But hey ho! I now discover that these amazing specimens are not aloes after all – but agaves. They must be related in some way but my resident artist and economist doesn’t stretch to botany so I can only speculate.

Agaves. The hillsides near the pueblo are studded with these. Further from human habitation, right out on the campo (literally the ‘field’ but the word describes the countryside around but beyond the village), there are none of them, which makes me think they were introduced as ornamental shrubs and have multiplied over the years. Quite some ornaments, their great woody stems hoisted 20 or 30 feet up into the air to brandish an extravagant superstructure of flowers like a stack of massive candelabras. They have the look of prehistory, like relics of some bygone era, when vegetation was of a different order of magnitude: Jurassic plants. They are moored to their huge, thick leaf and root systems, hard-as-rock bases like enormous overlapping tongues of green. They arch and yaw at all sorts of angles, moved by the wind or just overwhelmed by their own weight. They are eccentric, quite extraordinary plants.

Apart from these weirdos, the plant life underwhelms at first sight. The foothills of the sierra are like a succession of interlocking slopes separated by rocky defiles or barrancas. Across this topography you see a sort of mottled mat of low-growing shrubs, all merging into a muted green, like a massive outbreak of acne on a particularly craggy face. It’s not beautiful; it’s just everywhere. But close up, it’s quite different. The mottled mass gets disaggregated into individual shrubs, some of them admittedly pretty nondescript, but others elegant and subtly colourful. I don’t know the names, although some of them look familiar. I tried a google or two but it never quite works for me. I don’t know about you, but if I look up flora or fauna (and especially birds) to try and identify them I’m never quite certain that what’s in front of me (or, has just flown off) is what’s described in the book. But I’ll try and paint a word picture.

In bloom and in abundance along the roadside and across the hills and barrancas, is a gentle plant with the softest sage-green leaves, and limpid yellow flowers stretching in pairs up slender stalks. This beauty seems to grow in evenly sized clumps as if the work of a very methodical landscape designer following a detailed planting plan. But actually this is just random, randomly regular. In between, and less ‘clumpy’ there are different types of wild flower, many familiar to me from British roadsides and hedgerows, like delicate tiny lavenders with flowers of the palest blue. Many of these smaller wild flowers are in shades of purple shifting across a spectrum from strong plums, magentas and violets to almost imperceptible hues of periwinkle.

The hillsides also abound with wild thyme and rosemary, both with that intensity of aroma that comes when herbs have to work their socks off for moisture and spend hours in the sun. A stash of freshly picked herbs resides in our cortijo kitchen; local potatoes roasted to within an inch of their lives with garlic and rosemary are a taste sensation and Himself likes a sprinkling of fresh thyme to jazz up his mushroom risotto.

Sadly, most of the old terraces are crumbling back into the hillside, their stately lines, crafted in beautiful stone, abandoned. This is so sad. I would love to have seen this place when the land was still worked, the slopes refashioned and persuaded to yield up some fertility to nourish olives or almonds, like they do a few miles inland. While there are some olives and almond trees around, they are sparse and unconvincing, interspersed with some dark-leaved carobs here and there. There are also quite a few of those straggly Mediterranean pines that have the body of a deciduous tree but the foliage of an evergreen, their needles long and held in clusters.

Here is where we segue into the fauna of the area, or at least its entomological strand. From the branches of these pines hang some white appendages shaped like upside-down cones. From a distance they look like delicate lanterns made of spun silk (pic below). These strangely alluring things are formed by some utterly horrid little critters called processionary caterpillars; this is their nest. This is worth googling, but not if you’re of a nervous disposition when it comes to creepy-crawlies because these are nasty, mean little beasties with particularly poisonous hairs all over their tiny bodies. Touch them and you’re in for some serious discomfort and a trip to hospital; if your dog touches them, it’s Adios, Fido! The thing is, apparently, to arm yourself with a can of hairspray so you can neutralize the hairs in a haze of VO5, then don some body armour – total coverage needed – cover the nest with a bag, chop down the affected branch, splosh with lighter fuel, or whatever comes to hand of an inflammable nature, and burn the buggers. Slight problem at the moment that fires are not allowed on the campo because of the drought and the severe fire risk. Oh-oh! 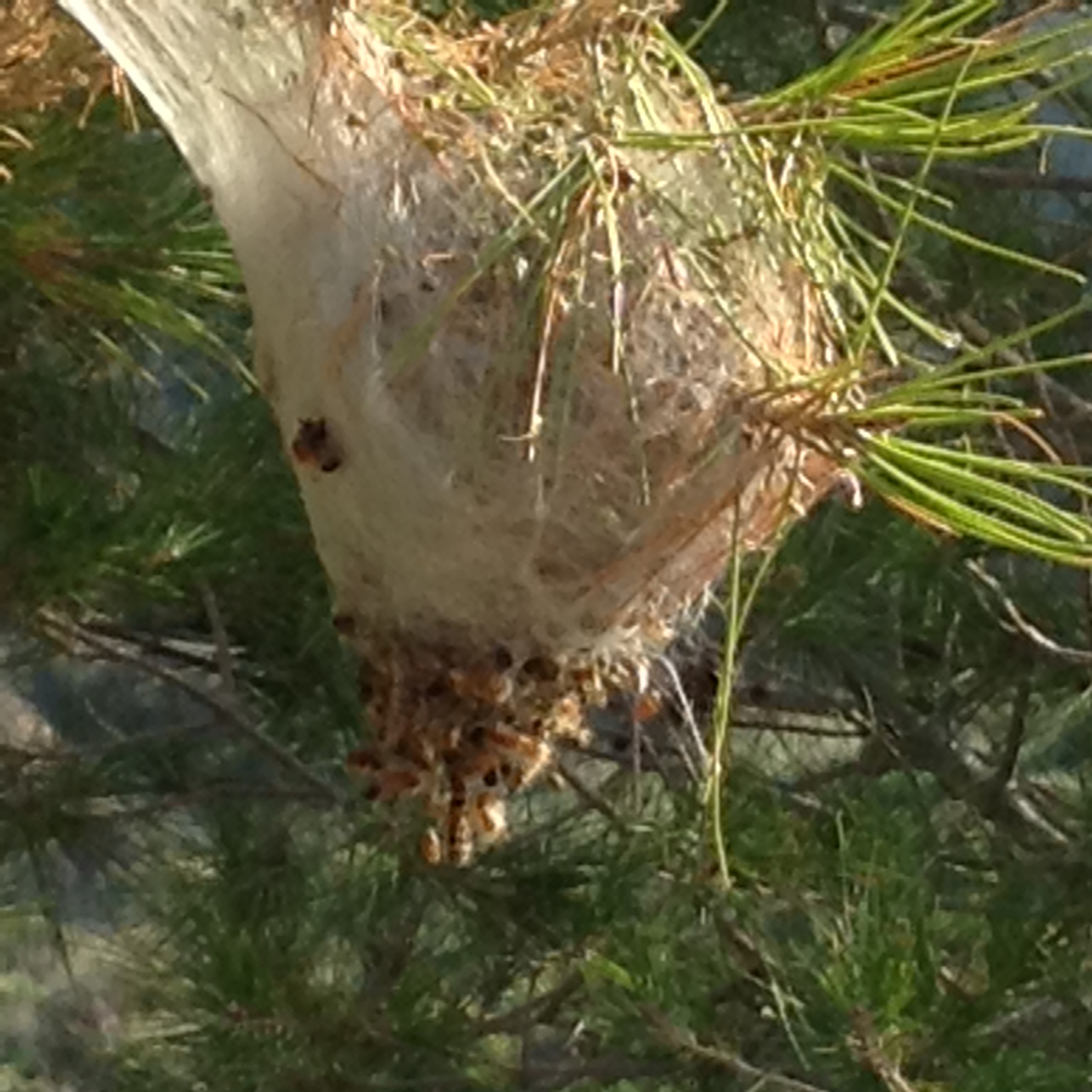 Our plan is to give the processionary caterpillars a wide berth. Other creepy-crawlies are less scary. There are some unusual looking beehives just down the hill from us – like a row of old-fashioned luggage trunks. One resident in particular, has a penchant for turpentine and oil and visits daily to try and squeeze some pollen out of a bit of landscape the Artist has painted in yellow – actually blue’s quite a draw too. Or maybe he just appreciates art? Not many birds, a few in the mornings but I reckon they steer clear of those processionary caterpillars. A couple of very pretty pigeons do their doo-ing (I mean the vocal stuff not the alimentary stuff, though maybe they do that too) on the fence at the side of the house virtually every day, and there’s a little bird with a jaunty head feather that puts in an appearance from time to time. But I guess this isn’t nesting territory – although I imagine there are game-type grousy things higher up in the scrubby shrubbery.

Lizards dart about now and again from under a stone and I’m sure a small black snake slithered off the roof the other day. But otherwise the fauna are restricted to pet dogs (I use the plural advisedly as dogs are always owned, it would appear, in multiples). We heard from a dog-owner that there are wild boar down in the barranca below us, ready to pounce on an unsuspecting pooch. Very exciting but no sightings as yet.