Posted at 07:01h in Travel bits and pieces, Uncategorized by woodman1 1 Comment

Sofia’s central station has all the features of a communist era low-budget structure, whose mean concrete lustre has faded while its contents slowly crumble – every escalator is broken, paving stones cracked or ripped up, unlit corridors connect grim platforms.

Under grey skies we climbed down from the night train, tired, unwashed, we escaped the man touting to sell us information and the one whose taxi was waiting to ‘takes us to hotel’ and took off into the city on foot. This is a perilous undertaking as the pavements in Sofia are unbelievable, broken up, potholed, split wide open by the roots of trees. You do not want the be a blind man walking in this city. Finding our hostel was a miracle given that our map was schematic to say the least, my Cyrillic remains deeply approximate, and an entire section of the city has been cut off behind an enormous 2km barricade while they build a new road. Finally, with a little help from a dashing young Bulgarian, we got to Hostel Nightingale and into the tender and smiling care not of Florence but the lovely Sylvia, hostel factotum.

Good intentions for a gentle stroll in the city centre were cut short by one of the massive Balkan thunderstorms which seem to arrive every afternoon! That was yesterday and although there was another storm today, it was not before we had had another terrific city walking tour with the fabulous Niki. And discovered, much to our surprise, that Sofia is a lovely city with a compact little core of stunning buildings. Most memorable for me was when he took us to a spot beside one of the main roads and pointed out four important buildings you can see – an Eastern Orthodox church, a Catholic church, a mosque and a synagogue. They call this the Square of Tolerance and it seems to sum up a bit of the Bulgarian story, caught between so many political and religious movements that they have had to duck and dive to survive, accommodate, procrastinate, change sides if necessary. They seem to be a very pragmatic lot!

Some wonderful stories – like the plot against King Boris back in the 1920s. Funerals of high-ranking dignitaries and military bods were always held in a particular church, St Sunday. So the communists bumped off a General and then set a bomb trap for the day of the funeral killing about 200 people but old King Boris was not amongst them as, typical of Bulgarians apparently, he turned up half an hour late! Niki has us play out the story of Bulgaria’s short-lived monarchy with Jim starring as King Simeon a deft politician who managed to get himself invited back from exile after the Communists got dumped in 1989 only to be sidelined into coalition later when he promised everything and delivered zilch. Typical politician and a superb performance from himself, the boy, the artist turned actor.

And in a display of bravura, the Bulgarians have replaced a statue of Lenin that stood facing the old Communist HQ with the most bizarrely kitsch statue supposedly of Sofia herself. This dishy dominatrix stands atop a high black column with a plunging decolletage complete with nipples showing and flowing robe clinging to her thighs. She has, in a new departure for dominatrices, an owl, a laurel and a crown, pagan symbols of this and that. It could not be less appropriate as a representation of the city which is named after Hagia Sofia – the wisdom of God. Oh dear, what a boo boo that was!

Amazingly, on the tour we met two former neighbours of Jim and Viv way back when. So strange as we all introduced ourselves from far off places like Israel, the US, Australia, Taiwan, Surbiton and Teddington!

Thanks to Niki for a fabulous tour, going one better even than Jovana in Belgrade. Passionate about the city and about his country, knowledgeable, amusing, ironic and wonderfully self-deprecating about Bulgarians, a born actor and a pleasure to meet.

On the tour we saw the beautiful National Theatre and returned there later for Jim to do a spot of sketching. By the way, I am holding the umbrella over him while he completes this as the thunder started to roll….. 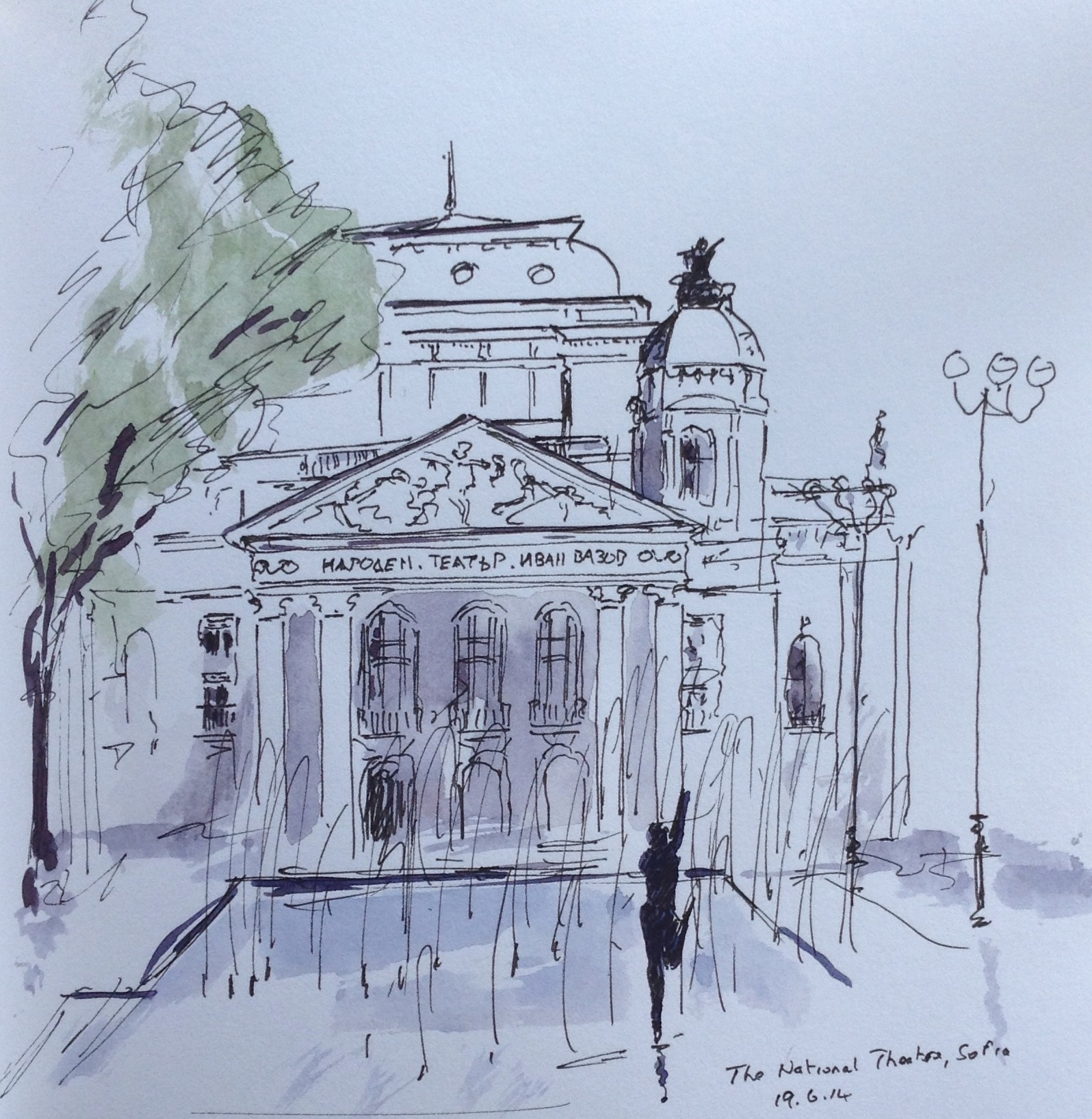