You didn’t misread that – yesterday we walked to Tenerife!

At 394 metres (that’s 1292 feet and towering over Box Hill!), Cerro Tenerife (‘Hill’ Tenerife – ‘Mount’ would be overstating it) is the highest point of the Sierra Almagrera, a rocky spur that runs northeast to southwest close enough to the shore of the Med for Goliath to be able to chuck a stone. This proximity to the coast gives this modest sierra and Tenerife a grandeur that their scale alone would not justify. From the top you can see across the plain towards the hillside where Bedar nestles – so not too far from home.

We found a book of walks covering all the Sierras of the Almeria region in the splendid Libreria Picasso, rapidly becoming a favourite haunt of ours on trips to Almeria for conversation classes (me), turpentine (The Artist) and tapas (both). The bookshop is in downtown Almeria near the central market – perfect. Cover to cover the guide is in Spanish but my intermediate level, helped by those classes and the daily exchanges en español with the Girl in Buenos Aires who never shies of correcting my errors, was up to the task of following the instructions, with a bit of pre-walk dictionary surfing for the odd unfamiliar but possibly critical word.

So off we set on a sparkling day with not a cloud in the sky and a happy temperature for walking – not too hot, not too cold, just Goldilocks as they say! It was an inauspicious start at El Altea, an abandoned mining village about 3 km inland, reached by a dirt track through fields planted with lettuces, which the Berlingo took in its usual stately style (the track, of course, not the lettuces). El Altea was a substantial settlement, with several streets lined with uniform 2-storey accommodation blocks, a bit like student residences, here at the foot of the sierra. Now, the streets or ‘calles’ are overgrown with weeds and shrubs; birds nest in the crumbling buildings whose walls are covered with graffiti; pane-less windows reveal decaying debris; door-less doorways make visible broken stairways. It’s creepy and a bit discomfiting; you expect someone to jump out at you, some crazed recluse whose domain you have breached, or some bandito with bushy whiskers and a swarthy look. But no, just the odd fleeing pigeon, disturbed from its roost. After clearing the village ruins, the path passes some disused polythene tunnels and a scruffy yard with a ripely rancid smell of goat before emerging into the Rambla de Frances, where you walk past a dam and start along the old river bed, feeling at last that the walk has begun. Who knows when water last flowed through this channel?

We hadn’t realised how extensive mining activity was in this corner of Spain. We have it in Bedar, where we hiked a couple of weeks ago. El Alteal is on an altogether bigger scale and yet there is not much sign of it from the main road. The abandoned accommodation blocks could have housed agricultural workers; the old ‘Central de Transformacion’ and its old chimney are tucked away, unremarkable until you’re right up beside them. As you pass through the Rambla or Desagüe de Frances (literally the drainage channel of Frances) and climb out onto a plain covered with more lettuces – enough already! – you hang a right and see the first broken chimney and deserted buildings.

From here on, you’re up in the sierra where the residual bricks and mortar of mining are scattered everywhere. With every corner you turn over about 5 or 6 km of the steadily rising track, another mine reveals itself with all the buildings and paraphernalia of past activity: small sheds, bigger storage buildings, yards, massive chimneys, some of them almost intact, constructed with that little decorative (or is it important functionally too?) skirt at the top. Is called ‘coping’? All the infrastructure needed for mining minerals, mainly lead, now in various stages of dereliction, looking, if one didn’t know better, like abandoned Moorish citadels with the aged pale golden and reddish hues of their stone and brick merging into hillsides. They have captivating names, these mines, somehow elevating this base, harsh activity to a more exalted level– Poderosa Envidia, Ramo de Flores, La Riojana, Patriarca y La Iberia, Venus Amante – exotically labeled, captured in time, preserved in their crumbling glory on this arid hillside. It’s an astonishing sight, truly incredible and such a surprise. Faded PELIGRO! signs warn you not to wander from the track because there are ‘pozos’ (holes) here and there, hidden but dangerous openings to mineshaft or air vents.

As you climb the views are fabulous, but what strikes you most is the extraordinary contrast of scenery. It’s like a tableau of history and geography captured in a single glance. There’s the industrial infrastructure of the mining in the foreground, then, as your gaze lifts and you look further out, there’s the agricultural mid-ground with its green carpets of crop that stretch out over the plains, industrial-scale agriculture for sure, but a telling contrast to the mines. Then in the distance, your wider view reaches across the plain to other sierras – Sierra de Cabrera, Sierra de los Filabres. And you see in this landscape how the base material is desert. This is the medium out of which the view is painted and the terrain is hewn. Cultivation needs cleverly-planned irrigation pipes to be laid along the channels in which the little plants are dug in, otherwise they will perish as the spring and summer heat builds. Or else it needs the acres of plastic sheeting that covers hectares of this region, protecting the crops from pests and maybe conserving, in these months of cool nights, some precious condensation. These vast plastic tented areas look, in the distance, like unnaturally regular watercourses, wide rivers or lakes shimmering in the sunlight. It’s oddly breathtaking – not beautiful but strangely fascinating.

I found myself wondering, as I trekked the gentle camino, what the immediate landscape was like when mining was at its height. The hillsides must have been humming with hammers and pickaxes, the sounds of stones sliding down chutes, tumbling into tubs, men talking, shouting, groaning with effort, coughing, no doubt. This can’t have been a healthy way to earn your living. The hillsides would have been grimy, the tracks trodden down hard with the traffic of wagons and feet. There’s only one place on the whole trail where the soil has been damaged by the effluent of lead being mined, with seepage that discolours the ground and renders it barren for eons. So it seems, thankfully, that this was well-managed mining.

It’s still a treeless scene today but to see how nature has edged its way back, recovered the slopes and paths, is a delight. For all I have oohed and aahed at the wild flowers and herbs in the campo and on the roadsides near us, this is something else. The variety of species and intensity of colour and fragrance here was of a different order. Staggeringly beautiful examples of that strain of lavender, long-stemmed, slim and delicate tiny flowers clustered in a stately china blue; small-leafed little sister of the lavatera we all know and love, adapted, no doubt, for this environment and still bearing a few whitish opal-pink flowers; my lovely yellow favourite from the roadside near us, resplendent in bloom; and a couple of newcomers to my list – tiny flowers like those of a wild rose with its open petals on viciously prickly stems in a creamy-ivory or a deep mauve – both with a yellow centre. Little stunners and all of this a huge surprise and a massive treat.

It was a wonderful few hours of walking and the Artist captured the scene before us (see below) as we stopped for coffee from our thermos. At the top of Tenerife, the views are spectacular. You can photograph them but you can’t capture them. A poignant stone cairn has been lovingly erected at the summit by the Walking Club of Mojacar (a village along the coast extensively colonised by Ingleses) in memory of one of their number. We tarried a while to feast on the view then headed back down by the same route, stopping to munch our usual hiking fare, a cheese and tomato sandwich, beside the last of the decaying buildings. Some food, some reflection, some rest and then out of the world of mines and back down among the lettuces to make our way home. 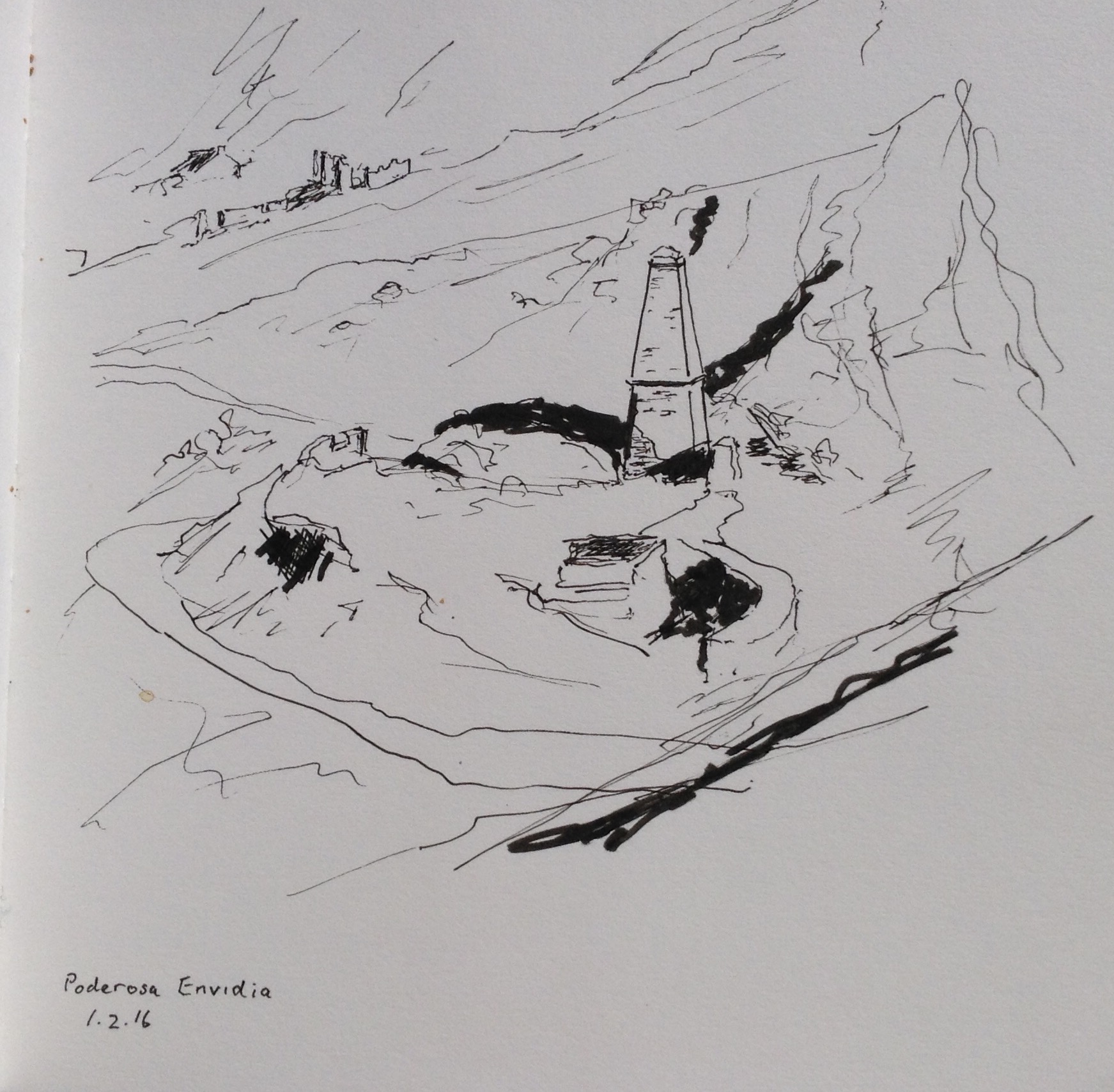